In 2009 I first participated in the Seven Hills of Edinburgh. After finishing in 2:34:59 I told a friend that, one day, I'd complete the race in less than 2 hours. We made a bet out of it and set 2019 as the deadline. Over the years I trained hard and got better, resulting in a decent 2:03:27 last year. This year, however, nothing over 2 hours would be enough for me. Here's how it went.

Living in the Netherlands, I often get asked how I train for the hills. Perhaps I'll get into more detail in another blog (if this indeed does turn into an actual blog, not just a place to post this race report). The short version is we have an artificial hill near my hometown Rotterdam. Just under 100 feet in altitude. That's where I do hill reps. Training options are obviously more limited than in Scotland, but it's far from impossible to prepare yourself for hills when living in the flattest part of a flat country. You just have to make the most of what you do have. 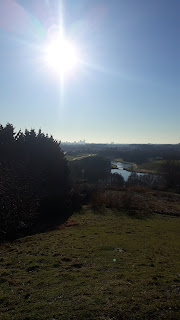 The view from my training hill


As much as the Seven Hills race is an obsession for me, I don't want to come over for just the event. Scotland has much more to offer, and this year we (I always bring a group of people over, we're the "Dutch friends" referred to on the website) decided to do the Black Rock '5' as a warm-up. Really fun event on a challenging course. To save my legs a bit I didn't really race it, just made a bit of an interval training out of it and enjoyed the atmosphere. Despite that I still ran faster than in 2017, when I did try to go as fast as I could (but admittedly was in a bad shape). Good boost of confidence ahead of d-day.

Saturday we often visit parkrun, but I was still saving my legs so I opted to volunteer instead. Ever the tourist, I did jog up and down to Cramond Island for a few photo's with Matt and Robin, who did choose to run the parkrun. 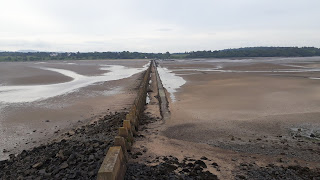 Tide was just right to get across before the parkrun started


My final prep was the barbecue in the evening that Alan (Seven Hills organiser) hosts for both the volunteers and the overseas competitors. The way he makes us feel welcome every year is most certainly part of the reason we keep coming back. (That, and a certain bet I made as mentioned before.) The multitude of beers available at these gatherings is a bit of a pitfall, though. So Alan told us about the 3-pint rule: drink exactly three pints, no more, no less, for a perfect Seven Hills the day after. It worked for me in the past so I made sure I got the exact intake.

After a good night's sleep and a fine breakfast, we strolled towards the start. A little detour ensured that even our first timers would be able to find the fast route up Calton Hill when finishing their race. Though last year Koen, running his first Seven Hills, managed to miss Calton Road entirely despite me showing it a few hours before. This year he was back with a vengeance, staying in a B&B just across the steep path up Calton Hill. All so he could study the route through the bedroom window. A dedication for the race that even I haven't shown in the past years.

At the start we met Jelmer, a Dutchman who lives in Edinburgh. Being Dutch he was competing against us for the "Best Dutch Runner" trophy that Alan had installed in 2013 (it was retroactively awarded to the fastest Dutch runners from 2009-2012 as well). He announced he'd done quite a few recces and was hoping to go sub 2 hours as well. That suited me fine, perhaps we could work together a little and both get a good time. Reaching my goal time was more important to me than retaining the title.

So when after the countdown I saw Jelmer dashing off towards the Castle, I wasn't too bothered. I knew that at this stage of the race it was important to pace myself properly. Too fast and I'd pay the price in the second half of the race, too slow and I would lose precious time. Based on my previous results, I'd made a rough schedule with split times along the course. Moving along the Haymarket route I noticed I was going slightly faster than last year, at a pace that still felt comfortable. Perfect!

Up Corstorphine I passed Jelmer and took the lead in the Dutch competition. Marijn (who like myself was doing his eleventh consecutive Seven Hills) was right behind me though. From the top I followed my own route on the downhill, I did a small recce here in 2016. I'm quite happy with this very direct line to Kaimes Road, though a runner in a red vest (probably Carnethy) passed me by taking a slightly different path.

Down Kaimes Road, Marijn showed his superior downhill speed and passed me. Traffic was good at the road crossing, and pretty much for the rest of the way towards Craiglockhart as well. Somewhat surprisingly I passed Marijn again, even though he's usually better on tarmac. Just like during the stretch to Corstorphine I was happy with my pace. Fast (over a minute ahead on the schedule I made), but still feeling fresh. It was too early to celebrate, though, as I knew the tough bits were still coming.

The steep slope up Craiglockhart was extra slippery. I didn't think there had been too much rain since we arrived, but I later heard there had been many showers in the week leading up to the race. The course was a bit harder than usual as a result. Still I got up fine, though I didn't feel overly strong on the grassy bit to the top. A bit concerning, but I had no time to worry and quickly took the downhill towards the water station. It was quite a warm day, so I made sure I drank at every stop, this one included.

There's a bit of a debate within our group whether or not the Fly Walk shortcut is actually faster. It's definitely shorter, but as I was going up the grassy back, heading for the park exit, I did wonder if I wasn't losing time while wading through tall grass at a steep angle. Either way I was still making good progress as I reached the water station. A bit weird not seeing Charles Passmore there. He manned that station for as long as I can remember, but sadly passed away last November.

Just like during the climb of Craiglockhart, my legs felt as if something was lacking. Nevertheless I made good progress. I still had a buffer for my scheduled split time on top of Braids, so I kept moving as fast as I deemed sensible. The downhill went well, thanks to all the challengers who stepped aside on the narrow bits to let me pass.

On the Lang Linn Path I do believe I made a mistake. The past two years I'd been following others who took a nice shortcut, going left early. Despite having studied the line on Strava, I wasn't overly confident without runners in front of me and before I knew it had missed it. It's only a handful of seconds, but the 2-hour mark is very ambitious for my abilities and any time won with route choices would be welcome. With a bit more bravado I'd have saved precious time here.

That's not to say I didn't take any risks. On the downhill I bypassed a hairpin by buttsliding down. This must be when I cut open my knee, but it didn't bother me during the race. I did note however that I easily could have cramped here as the sliding was far from fluent. Over the bridge and onto the slope, which seemed even slicker than the one at Craiglockhart. Scrambling as fast as I could, clutching at roots and trees, I did make it in good time. The steps up Blackfort are always a pain for me, this year was no different. Especially here I felt I didn't have good climbing legs.

At the top, I was exactly on my schedule (1:19:30), so the buffer I had was gone. Without hesitating I went for a quick downhill, through the allotments (thanks, John) and on towards Pollock Halls. On Mayfield Road I grabbed a quick drink at an unofficial water station, set up in someone's front yard (much appreciated). My goal was to reach the official water station at 1:32 and I was just 20 seconds over that time. Still possible, and on I went. Perhaps I should've taken a chance and tried to do the campus shortcut, but my legs felt pretty banged up and scaling the wall might have been a bit much. 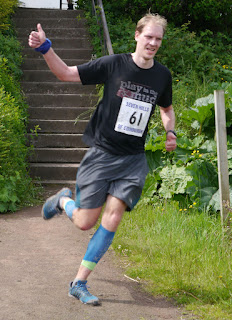 Photo by John McCurdy,
who also ensured this shortcut was available

The bit towards Arthur's Seat hurt, but I did make up some time. Since 2014 my route of choice has been Gutted Haddie and this year was no exception. Knowing that I lack the power to run up I might as well take the shortest line. Dragging myself towards the top I checked my watch a few times to see I was still behind schedule. Nothing left to do but to give it my all on the downhill.

Pretty sure this was the fastest I've ever been on the Dasses and passing Holyrood I knew it was still possible to go under 2 hours. I was, however, rather exhausted. Starting to climb Calton Hill I had to be fast, really fast, but my legs were drained. I kept fighting, but the clock was ticking relentlessly. After the steepest bit was done I could pick up the pace a little, chasing another tired runner who switching between walking and sprinting.

The final corner. One last glance at the watch. 2:00:01. Some curse words. Drained both physically and mentally I could only walk the last bit. Looking over my shoulder I saw Marijn approaching and I still managed a jog to at least fend him off. Official time: 2:01:09.

So that's my story. I trained hard, tried hard, yet ultimately fell short. To be honest I had expected to be more cranky. But I suppose there were positives as well. I had proved to myself that it's possible to run sub 2 hours. Just not this day, not within the limit set by the bet I made ten years ago. Doesn't mean I'll stop trying. I'll be back next year, and even when I finally make it, I'll still be back the year after.

This is my favourite race. Probably always will be. And running it will always bring a smile to my face. See you next time. 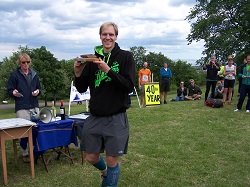 Not the goal I had set, but still happy to win this trophy